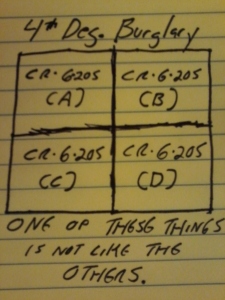 In Bane v. State, the Maryland Court of Special Appeals addressed the impeachment value of misdemeanor breaking and entering. (73 Md. App. 135 (1987)). The court held in Bane, “misdemeanor breaking and entering involves no felonious or larcenous intent… [in the absence of substantial facts from the underlying conviction to indicate otherwise] …  the conviction of breaking and entering does not necessarily indicate such ‘base or vile’ conduct as would constitute it a crime of moral turpitude. We hold, therefore,  that it is not an offense involving such moral turpitude that evidence of a conviction may be used for impeachment purposes. ” (Id at 150).  The court went on to find that “statutory breaking and entering is [not] among those lesser violations having ‘some tendency to show that the person charged is not to be believed under oath.'” (Id at 151 quoting Cousins v. State, 230 Md. at 4).  This is due to the fact that “the offense of statutory breaking and entering lacks the proof of any conduct that ‘could lead a rational person reasonably to conclude that one who would commit such a crime would be less likely to speak the truth than one who would not commit such a crime.'” (Id. quoting Burrell v. State, 42 Md. App. at 140).

Under Bane v. State, a criminal defendant should not be subject to impeachment for prior conviction, in and of itself, for violation of CR 6-205 (a) or (b) because the language of the statute deals only with breaking and entering.   Likewise, a prior conviction, without additional facts, for CR 6-205 (d) does not, on its face, generate impeachment value.  However, this is not the case with CR. 6-205 (c), whose language does include intent to commit a theft, a crime of moral turpitude,  making it ripe for impeachment.